These disparities may be driven by delayed diagnosis and treatment as well as genetic differences, according to researchers.

The researchers evaluated data from 89 non-Hispanic Black and 566 non-Hispanic White AYA patients with AML treated on CLGB/Alliance clinical trial protocols between 1983 and 2016. Patients were treated with intensive chemotherapy induction followed by intensive consolidation chemotherapy or autologous hematopoietic stem cell transplant. Targeted sequencing and longitudinal genomic profiling were performed in a subset of patients.

There was no significant difference in disease-free survival between the Black and White patients for AYAs overall or for the 18-29 age group.

Black patients aged 18 to 29 years did have a lower complete remission rate than White patients, at 66% and 83%, respectively (P =.01). For all AYAs, the complete remission rate was numerically lower among Black patients than among White patients, at 73% and 82%, respectively, but the difference did not reach significance (P =.06).

The researchers also found that genetic features of AML were different between the races. Black patients were less likely than White patients to have normal cytogenetics at diagnosis (19% and 40%, respectively; P <.001). Black patients were also less likely to have normal karyotypes, NPM1 mutations, and biallelic CEBP mutations. They were more likely to have CBF rearrangements and mutations in ASXL1, BCOR, and KRAS.

“We believe that these data and other data justify further prospective studies of Black AYA patients with AML, including evaluation of alternate frontline and/or consolidation treatment,” the researchers wrote. They added that efforts should also be made to collect data of “social determinants of health to try to assess nonclinical reasons for poor outcomes, as well as careful consideration and enhanced monitoring for the individual Black AYA patients with AML being treated in the clinic today.” 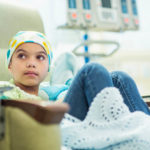 SAFER Ukraine: A Global Effort to Evacuate Children With Hematologic Cancers From Ukraine