Methods: The available medical literature on UCD and MCD was reviewed. The clinical presentation and pathological diagnosis of Castleman disease was reviewed, along with associated disorders such as certain malignancies and autoimmune complications.

Results: Surgical resection remains the standard therapy for UCD, while systemic therapies are required for the management of MCD. Rituximab monotherapy is the mainstay of therapy; however, novel therapies targeting interleukin 6 may represent a treatment option in the near future. Antiviral strategies as well as single-agent and combination chemotherapy with glucocorticoids are established systemic therapies. The management of Castleman disease also requires careful attention to potential concomitant infections, malignancies, and associated syndromes.

Conclusions: UCD and MCD constitute uncommon but well-defined clinicopathologic entities. Although UCD is typically well controlled with local therapy, MCD continues to pose formidable challenges in management. We address historical chemotherapy-based approaches to this disease as well as recently developed targeted therapies, including rituximab and siltuximab, that have improved the outcome for newly diagnosed patients. Ongoing research into the management of MCD is needed.

The patient from that case was a man aged 42 years who presented with high fevers, sweats, fatigue, and a nonproductive cough. He was found to have an anterior mediastinal mass with anemia and an elevated sedimentation rate.

The treating physician suspected tuberculosis and empir­ical streptomycin was administered prior to complete surgical resection. The discussants favored a diag­nosis of teratoma or dermoid cyst, also considering mediastinal tuberculoma, thymoma, and Hodgkin disease. Castleman presented the surgical pathology and described a new syndrome characterized by hyperplasia of mediastinal lymph nodes with regressed germinal centers.1 The disease did not recur in this patient following surgical resection.

Histologically, Castleman disease may be classified as either the hyaline-vascular or plasma cell variant, with occasional cases demonstrating mixed features.3 The hyalinevascular histology accounts for most UCD cases and the plasma cell type characterizes most cases of MCD. UCD is typically localized, associated with minimal symptoms, and treated with local ther­apy alone.

However, MCD is a systemic disease that commonly occurs in the setting of HIV infection and is clinically characterized by diffuse lymphadenopathy, splenomegaly, anemia, and systemic inflammatory symptoms.4 Accordingly, MCD is primarily treated with systemic therapies.

Although Castleman disease is not a malignant condition, the condition has been associated with an increased risk of developing certain malignancies and other diseases, most notably large B-cell lym­phomas, along with polyneuropathy, organomegaly, endocrinopathy, monoclonal gammopathy and skin abnormality (POEMS) syndrome, follicular dendritic cell sarcomas, and paraneoplastic pemphigus.5-7

Kapo­si sarcoma is also commonly diagnosed concurrently or sequentially with MCD because the 2 entities share a common viral pathogenesis.

The pathogenesis of Castleman disease is not fully understood; however, the central roles of interleukin (IL) 6 in UCD and both IL-6 and human herpesvi­rus (HHV) 8 in MCD have been well described.8-12

Dysregulated and overproduced IL-6, particularly in patients with MCD, stimulates the production of acute phase reactants in the liver, resulting in constitutional symptoms, including fever, sweats, and fatigue, and laboratory abnormalities, such as anemia, elevated inflammatory markers, hypergammaglobulinemia, and hypoalbuminemia. IL-6 also stimulates B-cell proliferation and induces the expression of vascular en­dothelial growth factor and increased angiogenesis.

HIV-associated MCD is uniformly associated with HHV-8 infection, although its prevalence in HIV-nega­tive MCD varies by the local prevalence rate of HHV-8. Plasma levels of HHV-8 DNA correlate with clinical symptoms and predict relapse rates in HIV-associ­ated MCD.13

In patients with HHV-8-positive MCD, HHV-8-infected vascular and lymphoid cells express a viral analog of IL-6 (vIL-6), which likely contrib­utes to the pathogenesis of this significant subset of Castleman disease. Both human IL-6 and vIL-6 are sufficient to induce disease flares in HIV-associated MCD and promote the expression of proinflammatory cytokines during disease flares.12,14-16 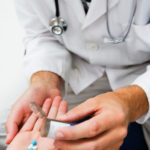