Most cases of UCD are histologically classified as the hyaline-vascular variant, which is characterized by increased numbers of small, hyalinized blood vessels within and between follicles with obliteration of the medullary sinuses.3

Lymphoid follicles are increased in number and exhibit features of “regression,” a term referring to a predominance of dendritic cells within germinal centers with a relative paucity of lymphocytes and a consequent broadening of mantle zones. The small lymphocytes of the mantle zones are frequently arranged in concentric rings around the germinal center (“onion-skinning”), and follicles may be radially penetrated by a blood vessel (“lolli­pop” follicle; Fig 1).

Plasma cells may be found in the interfollicular region, but they are typically few and present in small clusters. Cases with abundant plasma cells likely reflect examples of UCD with “mixed” or “transitional” features between the hyaline-vascular and plasma cell histological variants.17 (To view a larger version of the figure, click here.)

By contrast to hyaline-vascular Castleman disease, cases of plasma cell variant Castleman disease typi­cally show greater retention of the nodal architecture with hyperplastic follicles of varying sizes and focally patent medullary sinuses. The interfollicular region may be mildly hypervascular and characteristically contains sheets of mature-appearing plasma cells, which show monotypic immunoglobulin (Ig) G or IgA λ restriction in up to 50% of cases (Fig 2).17

Cases positive for HHV-8 show distinctive histological fea­tures with greater interfollicular vascularity, blurring of the germinal center-mantle zone boundary, and scattered plasmacytoid immunoblasts, or plasmablasts present within the mantle zones (Fig 3), giving rise to the term “plasmablastic variant” of Castleman dis­ease.18 Immunohistochemistry demonstrates positivity of plasmablasts for HHV-8 latency-associated nuclear antigen 1; these cells express monotypic IgM λ, but they have been shown to be polyclonal.

In some cas­es, the atypical plasmablasts coalesce to form micro­scopic nodules adjacent to or replacing some follicles, an early stage of large B-cell lymphoma arising in HHV-8-associated MCD; cases of frank lymphoma are characterized by complete effacement of the lymph node architecture by sheets of atypical plasmablasts expressing HHV-8 latency-associated nuclear antigen 1.19

Foci of Kaposi sarcoma may be present in some cases, and a diagnosis of Kaposi sarcoma must also be excluded in cases positive for HHV-8; in such cases, the atypical endothelial cells also show staining for HHV-8 latency-associated nuclear antigen 1 (see Fig 3).

From a pathological standpoint, Castleman dis­ease is a diagnosis of exclusion and its varied histolog­ical features give rise to a broad differential diagnosis that includes both benign and neoplastic entities, most of which can be excluded on the basis of careful histological examination, immunohistochemical, or other ancillary studies (eg, flow cytometry, molecu­lar genetics) and correlation with clinical, laboratory, and radiological findings. Angioimmunoblastic T-cell lymphoma and rare cases of early interfollicular Hod­gkin lymphoma may be associated with Castleman disease–like changes, including the regression of re­sidual germinal centers and hypervascularity.

Finally, the plasma cell variant of Castleman disease may mimic lymphoplasmacytic lymphoma (Waldenström macro­globulinemia) due to the large number of interfollic­ular plasma cells; this distinction may be particularly challenging in cases showing λ light chain restriction. In all of these scenarios, the diagnosis of Castleman disease can be made based on the lack of additional histological features supporting a diagnosis of lym­phoma and the absence of a clonal B-cell population with a characteristic immunophenotype.

(To view a larger version of Figure 2, click here.) 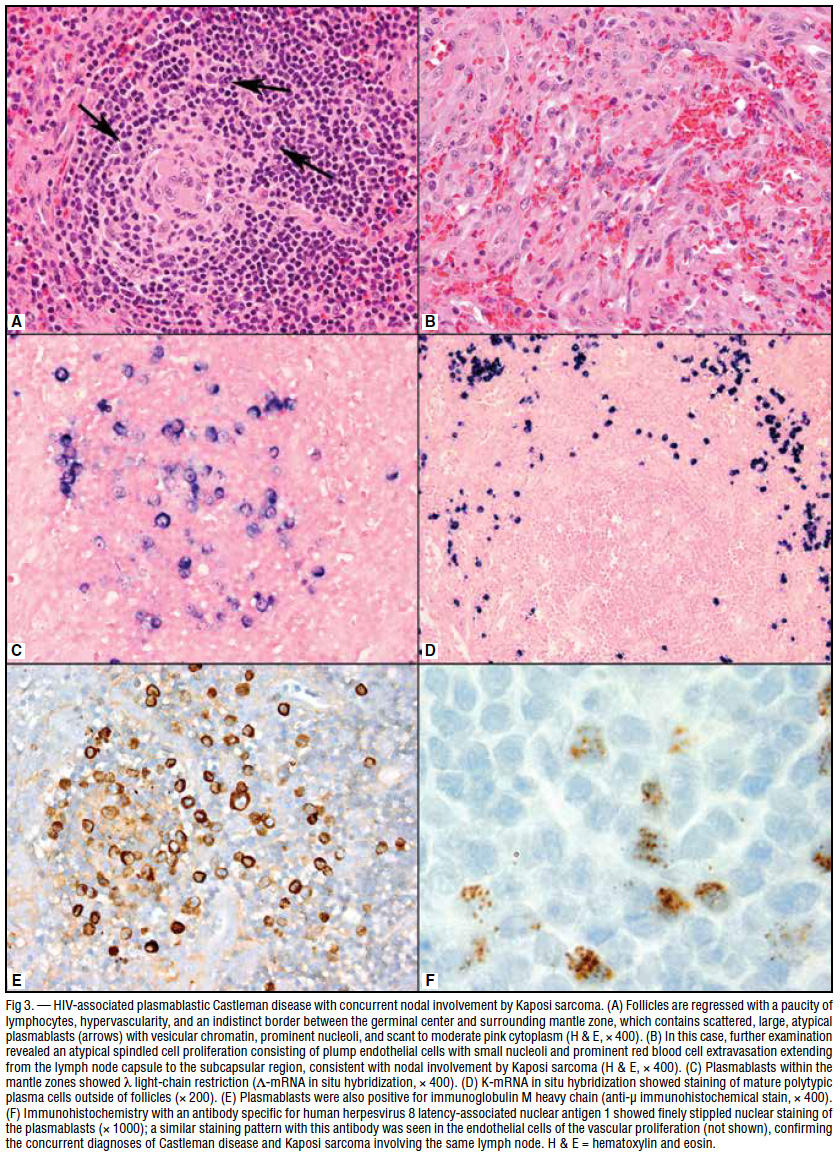 (To view a larger version of Figure 3, click here.)