Research has suggested that fatigue is a significant problem for people with myeloproliferative neoplasms (MPNs). These patients often struggle to cope due to a lack of knowledge about their condition and professional support. However, there is a dearth of research into MPN-specific experiences that might guide the establishment of interventions.

With the goal of learning more about the lived experience of people with MPNs, researchers conducted a qualitative study. They recruited 23 people with MPNs in Australia to participate in 7 interviews and 4 focus groups as part of the study. The findings were published in Cancer Reports.

The researchers reported that their findings resemble those of other studies that gauged cancer-related fatigue. For example, patients in those studies also experienced anxiety and changes to their self-identity as a result of their fatigue. The patients described their fatigue as being very different from “normal tiredness.”

“Our qualitative findings align with previously reported associations between fatigue severity in MPN and symptom burden and inversely with self-reported exercise,” the researchers reported. “Together, these point to use of established guidelines for cancer fatigue for fatigue in MPN, including symptom management, physical activity, and cognitive approaches.”

The researchers noted that all the participants were members of online MPN support groups and had low to moderate distress scores, so patients experiencing severe distress might have added some diversity to the responses.

Some people are more likely to gravitate to virtual focus groups and interviews, as deployed in this study, which may have influenced the results. For example, participants in this study were younger than the general population of MPN patients. The researchers suggest future research focus on recruiting patients with different demographic characteristics.

Clinicians should always acknowledge and address the fatigue experienced by patients with MPNs to help them achieve the best possible quality of life, according to the researchers. Until MPN-specific fatigue guidelines can be established, clinicians should use guidelines for cancer-related fatigue to help patients reduce their symptom burden. 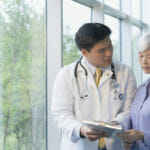 Fibrinogen May Be Associated With Poor Prognosis in Myelodysplastic Syndrome