Multiparameter flow cytometric minimal residual disease (MFC-MRD) assessments performed after each round of induction therapy may be a meaningful predictive indicator for survival outcomes among patients with acute myeloid leukemia (AML), according to a study published in the Journal of Clinical Oncology.1

A patient’s morphologic response to the first round of induction therapy (C1) often determines downstream treatment decisions, but findings from previous studies suggest that MFC-MRD may also be used to predict outcomes.

For this study, researchers evaluated the outcomes of 2450 patients younger than 60 years with AML or high-risk myelodysplastic syndrome who underwent MFC-MRD assessments after C1 in the NCRI AML 17 trial.  Patients were stratified according to resistant disease (RD), partial remission (PR), complete remission (CR), or CR with absolute neutrophil count below 1000/µL or thrombocytopenia less than 100,000/μL (CRi); patients assigned to the CR/CRi groups were further divided into MRD-positive (MRD+) and MRD-negative (MRD-) subgroups.

Patients who did not have high-risk factors, such as FLT3-ITD wt/NPM1-wt, received a second induction course (C2) with daunorubicin plus cytosine arabinoside, whereas patients with high-risk factors received an intensified course.

When adjusted for C1 response, the prognostic effectiveness of MFC-MRD status remained significant for relapse (P < .001) and survival (P < .001) after C2.

Moreover, MRD+ was significantly associated with poorer outcomes among patients in the NPM1-wt standard-risk group after C2, but was less discriminatory for poor-risk patients; patients with MRD+ had more benefit from transplant compared with patients with MRD-.

The authors concluded that “MFC-MRD can improve outcome stratification by extending the definition of partial response after first induction and may help predict NPM1-wt standard-risk patients with poor outcome who benefit from transplant in the first CR.” 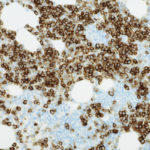 Pacritinib May Benefit Some Patients With Myelofibrosis