(HealthDay News) — Adult acute myeloid leukemia (AML) genomes have an average of 13 mutations, and almost all cases have at least one nonsynonymous mutation in a category of genes relevant for pathogenesis, according to a study published online May 1 in the New England Journal of Medicine.

Timothy J. Ley, M.D., from the Washington University School of Medicine in St. Louis, and colleagues from the Cancer Genome Atlas Research Network used whole genome sequencing or whole exome sequencing, along with RNA and microRNA sequencing and DNA-methylation analysis, to analyze the genomes of 200 clinically annotated adult cases of de novo AML.

The researchers identified an average of 13 mutations in genes of AML genomes, fewer than most other adult cancers. An average of five were in genes that are recurrently mutated in AML. Twenty-three genes were significantly mutated, and in a further 237 genes, mutations were identified in two or more samples. At least one nonsynonymous mutation was found in one of nine categories of genes that are relevant for pathogenesis for nearly all samples; these included transcription-factor fusions, the gene encoding nucleophosmin, tumor-suppressor genes, DNA-methylation-related genes, signaling genes, chromatin-modifying genes, myeloid transcription-factor genes, cohesion-complex genes, and spliceosome-complex genes. Strong biologic relationships were suggested among several of the genes and categories based on the patterns of cooperation and mutual exclusivity.

“We identified at least one potential driver mutation in nearly all AML samples and found that a complex interplay of genetic events contributes to AML pathogenesis in individual patients,” the authors write. 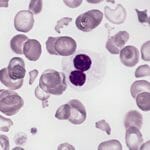