Though second- and third-generation EGFR inhibitors have efficacy against resistant disease caused by the T790M mutation, about 50% of patients have disease resistant because of another mechanism. This study evaluated stress hormones as a potential mechanism driving T790M-independent EGFR inhibitor resistance using in vitro techniques and assessed clinical outcomes using data from 3 clinical trials.

“We knew from our previous studies that stress hormones cause dramatic increases in IL [interleukin]-6 in ovarian cancer cells. That led us to ask the question whether stress hormones could also increase IL-6 expression in NSCLC cells and in turn promote resistance to EGFR-targeted therapies,” Monique B. Nilsson, PhD, of the University of Texas MD Anderson Cancer Center in Houston, and lead author of the study, told Cancer Therapy Advisor.

In a xenograft mouse model, in which the EGFR TKI–resistant NSCLC cells were injected into mice, stress resulted in significantly higher IL-6 levels (P = .002) and over 2-fold greater tumor volumes (P ≤ .04) compared with mice who were not stressed. Xenograft mice treated with a β-adrenergic agonist also demonstrated greater levels of IL-6 mRNA.

These data suggest that blocking the β-adrenergic receptor or IL-6 may prevent erlotinib resistance, even in the presence of a β-adrenergic agonist. 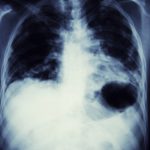