We sought to validate a bronchial-airway gene-expression classifier that could improve the diagnostic performance of bronchoscopy. 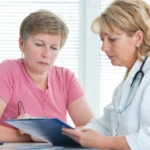