The International Association for the Study of Lung Cancer (IASLC) issued a policy statement in November 2019 strongly discouraging patients’ use of e-cigarettes. The statement also pointed out the absence of strong evidence supporting these devices’ role in the overall strategy of smoking cessation.1 It is imperative that patients with lung cancer and other malignancies quit smoking as quickly as possible using validated, evidence-based cessation aids, the authors stated.

That conclusion represents a “fair assessment” of the available evidence, said American Thoracic Society (ATS) Tobacco Action Committee chair and associate professor of medicine Michelle Eakin, PhD, of Johns Hopkins University in Baltimore, Maryland (Dr Eakin was not a coauthor of the IASLC report.) While e-cigarettes have been heavily marketed as a safer alternative to traditional cigarettes — and their use, as a means to stop smoking tobacco — the evidence base for these claims remains unclear.

“E-cigarettes have not proven to be a validated measure for smoking cessation and I think given the rising concerns about the risks of e-cigarette use, the IASLC Policy Statement is really saying they’re not going to recommend e-cigarettes for that purpose, which I support,” Dr Eakin told Cancer Therapy Advisor.

“There are a number of validated therapies for smoking cessation and tobacco-dependence treatment that have been shown to be effective, and we should be putting our attention on those methods as opposed to e-cigarettes,” Dr Eakin said. “At this point, I think the evidence base is strongest for varenicline [Chantix®].”

The health hazards of vaping appear to be most pronounced for people who use these devices with THC oils — one route of administration of palliative medical cannabis used by cancer patients. While cannabis offers benefits, patients should not vape THC products, emphasized Dr Eakin.

But that might be a hard sell, particularly among younger patients with malignancies. Adolescents and young adults diagnosed with cancer might reach for medical cannabis delivered via vaping products before other options, like edibles, because they’re already used to e-cigarettes and tend to view them as innocuous, thanks to marketing campaigns that have promoted their alleged safety.

“More than 30% of high school students are regular users of electronic cigarette products and it’s very difficult to help them quit,” Karen Wilson, MD, MPH, of the Icahn School of Medicine at Mount Sinai in New York City, noted.

A nationwide outbreak of e-cigarette, or vaping, product use-associated lung injury (EVALI) hospitalizations and deaths that began in June 2019 and peaked in September 2019 appears to have begun to slow.2-6 As of January 21, 2020, 2711 people had reported EVALI in the United States, 60 of whom have died, according to the US Centers for Disease Control and Prevention (CDC).2,4 No state was spared; the cases occurred in all 50 states, the District of Columbia, and in 2 US territories (Puerto Rico and the US Virgin Islands). As of January 14, 2020, patients ranged in age from 15 to 75 years, and the median age of deceased patients was 51 years.

Investigators now suspect vitamin E acetate, a diluting agent used mostly with THC oils, as one probable culprit in EVALI.5 However, the IASLC noted that other e-cigarette fluid additives, such as flavoring agents, might also contribute to vaping-related injuries.

CDC researchers reported in the January 17, 2020, issue of Morbidity and Mortality Weekly Report that their agency, the FDA, and state and local health departments had determined that EVALI patients in Illinois, Utah, and Wisconsin had acquired THC-containing products through informal sources.6 California and New Mexico state public health officials told Cancer Therapy Advisor that a similar situation prevailed there, with EVALI patients reporting illicit purchases of THC oils in the days or weeks prior to their hospitalizations. Nearly all EVALI patients’ tested THC fluids contained vitamin E acetate, which was also detected in patients’ lungs.

As of January 14, 2020, 82% of EVALI patients for whom substance use histories were available had reported recent vaping of THC-containing products. A third (33%) reported exclusive use of THC-containing vaping products; the rest of patients had also vaped nicotine-containing products.2 EVALI patients reporting THC oil inhalation are overwhelmingly white (73% for any THC product and 72% of patients reporting exclusive use of THC products).6 Of the 865 patients with data on frequency of use available, 74% reported daily THC use.

“There are other methods of delivery to be discussed with providers to avoid this exposure,” Dr Wilson said. “At this point, I think the concern is that people vaping cannabis, whether it be for medical or recreational reasons, are at significant risk for EVALI given the [potential] exposure to vitamin E acetate. The CDC recommends not using any vaping products that contain cannabis, particularly with this vitamin E acetate.” 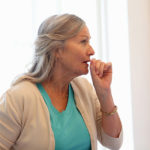 Prevalence and Experience With Cough Among Patients With Lung Cancer