Definitive concurrent chemoradiotherapy following chemotherapy has similar 5-year overall and progression-free survival rates compared to surgery for patients with resectable stage 3 non-small-cell lung surgery, a new study has found.1 Both a chemoradiotherapy boost and surgery are “acceptable strategies” for these patients, according to the study.1

“This study…addresses an important issue for good performance status patients with locally advanced disease,” Gregory Masters, MD, FASCO, of Helen F. Graham Cancer Center in Newark, DE, wrote in an email to Cancer Therapy Advisor.  “This is a significant group, accounting for up to one-third of all patients with non-small cell lung cancer.”

In the randomized phase 3 trial, 246 patients were enrolled; of these, 75 had stage 3a lung cancer and 171 had stage 3b disease.

The median age of patients was 59 years. Following induction chemotherapy that consisted of 3 doses of dose-dense cisplatin and paclitaxel on a 21-day cycle with neoadjuvant radiotherapy, patients received concurrent chemotherapy consisting of 1 cycle of cisplatin and vinorelbine. 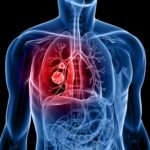