But, because patients on steroid therapy tend to be excluded from ICI clinical cancer trials, only nonrandomized, retrospective real-world data has been analyzed, making it unclear whether the correlation between steroid use and ICI outcomes could actually be causal.

“Corticosteroids, specifically systemic adrenal glucocorticoids, play a critical physiologic role in feedback inhibition of inflammatory responses and immune system homeostasis and have long been used for their immunosuppressive properties,” the authors noted.1

Nonsteroid alternatives for managing cancer symptoms should be considered if a patient might be administered PD-1/PD-L1–targeting immunotherapy, Dr Arbour said.

But patients should not forego “medically necessary” steroid therapy, such as those used for brain metastases, she cautioned. The central nervous system is 1 of the most common metastatic sites of NSCLC.2 Nearly a third (30%) of patients with NSCLC experience brain metastasis and half already have a metastatic brain tumor at the time of diagnosis of a primary lung cancer. 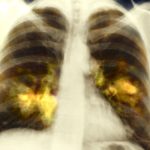