The US Food and Drug Administration (FDA) has approved brigatinib, a dual ALK and EGFR inhibitor, for the treatment of patients with ALK-positive non–small cell lung cancer (NSCLC) who progressed while receiving or are intolerant to crizotinib.1

Brigatinib was previously granted Breakthrough Therapy and Orphan Drug designation. This approval is contingent on verification of clinical benefit in a confirmatory trial.

The duration of response was 13.8 months during a median follow-up of 8 months.

Adverse events (AEs) occurred in at least 25% of patients and were most commonly nausea, diarrhea, fatigue, cough, and headache. The most serious AEs were pneumonia and pneumonitis.

Treatment discontinuation due to AEs occurred in 2.8% and 8.2% of patients in the 90 and 180 mg arms, respectively. 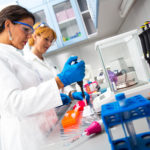