With a median follow-up of 38.6 months, patients assigned to receive osimertinib had almost a 7-month improvement in overall survival. The median overall survival for osimertinib was 38.6 months compared with 31.8 months for the other EGFR-TKIs (hazard ratio for death, 0.80; P =.046). This benefit was consistent across all subgroups examined.

Rates of grade 3 or higher adverse events were similar across the treatment arms.

Disclosure: This trial was supported by AstraZeneca. Some of the authors disclosed financial relationships with pharmaceutical and medical device companies. For a full list of disclosures, please refer to the original study. 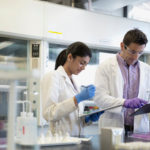