A team of researchers hoped to learn how the use of stereotactic body radiotherapy (SBRT), when combined with durvalumab, might affect patients with early stage non-small cell lung cancer (NSCLC). Specifically, they wanted to evaluate if the radiotherapy might act as an immunomodulator that would enhance the effectiveness of durvalumab, a monoclonal antibody and immune checkpoint inhibitor that binds to the protein PD-L1, preventing PD-L1 from binding with the PD-1 protein on T cells.

They conducted a randomized controlled phase 2 trial at New York-Presbyterian and Weill Cornell Medical Center in New York, New York, and their results were recently published in The Lancet Oncology.

The researchers enrolled 60 patients with potentially resectable early-stage NSCLC with an Eastern Cooperative Oncology performance status of either 0 or 1. One group of patients was randomly assigned to receive a regimen of neoadjuvant durvalumab monotherapy (2 cycles of 1.12 g IV infusion over 60 minutes), while the other group was treated with neoadjuvant durvalumab plus SBRT. Although the durvalumab cycles were the same for both groups, the second group received SBRT administered as 3 consecutive daily fractions of 8 Gy delivered to the primary tumor immediately before the first cycle of durvalumab.

The team found that the neoadjuvant regimen of durvalumab plus SBRT was associated with “a significant improvement in major pathological response.” The regimen also appeared to be well-tolerated and safe.

The researchers did note that it’s “not possible to completely dismiss the possibility that radiotherapy alone might have contributed to the observed treatment effect” but concluded that was “unlikely.” In fact, they believe their findings suggest a possible synergy between immune checkpoint blockade and radiation therapy.

The study was limited by a small sample size and an imbalance in PD-L1 gene expression between the 2 patient groups. “Despite the small sample size, the robust and better than expected effect size between the groups in major pathological response is promising and merits confirmation in a larger trial,” the researchers concluded.

Disclosure: This research was supported by AstraZeneca. Some study authors declared an affiliation with a biotech, pharmaceutical, and/or device company. Please see the original reference for a full list of study authors’ disclosures. 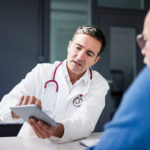