All patients with lung cancer should be considered for germline genetic testing, according to an ASCO Plenary Series presentation.

Researchers conducted a study of nearly 8000 patients with lung cancer and found that roughly 15% of these patients had pathogenic germline variants (PGVs). About 95% of those PGVs were potentially clinically actionable.

Dr Martins and colleagues set out to assess the value of germline testing in lung cancer by determining the prevalence of PGVs and any corresponding clinical implications.

The researchers analyzed data from 7788 patients with lung cancer. They underwent germline genetic testing, conducted by commercial laboratories, between 2014 and 2022. The mean age at testing was 63 years, and 71.1% of patients were women.

The median number of genes tested was 79. In the entire cohort, 49.3% of patients were negative for a PGV, and 32.8% had a variant of undetermined significance (VUS).

A PGV or likely PGV was identified in 14.9% of patients. The remaining 2.9% of patients were “carriers,” which meant they were heterozygous for an autosomal recessive cancer predisposition syndrome.

Dr Martins acknowledged that a potential limitation of this study was that “the referral for genetic testing may reflect a selection bias due to personal medical history or family history of cancer, making this cohort not representative of all patients with lung cancer in the general population.”

Nevertheless, Dr Martins said these results support the use of germline testing in patients with lung cancer.

“Given the current NCCN recommendations for germline testing in patients diagnosed with other cancer types, the Moonshot version 2.0 recommendations, and the profound implications for both patients and their families that results from identifying a PGV, our results suggest that all patients diagnosed with lung cancer should be considered for germline testing,” Dr Martins said. 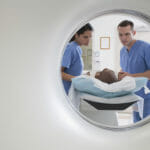 CT-Based Follow-Up Approach May Be Beneficial After NSCLC Resection