In March 2019, atezolizumab, a programmed cell death ligand 1 (PD-L1) inhibitor, in combination with carboplatin and etoposide, was approved by the US Food and Drug Administration (FDA) as a first-line treatment for extensive-stage small cell lung cancer (ES-SCLC).1 The treatment was a major milestone and the first new treatment for the aggressive cancer in decades; it increased the median overall survival by 2 months and reduced the risk of death by 23% compared with chemotherapy alone in this disease setting.2 The advance was celebrated as a major milestone.

Results from other immunotherapy trials in ES-SCLC quickly followed. Some — like the CASPIAN trial (ClinicalTrials.gov Identifier: NCT03043872) —confirmed the benefit of immunotherapy, and others contradicted it. Immunotherapies don’t work for everyone and have a delayed effect in others, so their full effect may not shine through until months or years later.

Cancer Therapy Advisor talked to oncologists and researchers to understand whether they think first-line immunotherapy will remain a mainstay of the ES-SCLC armamentarium.

A Long Wait for New Medications

Before the FDA approval of atezolizumab in 2019, there hadn’t been any improvements in treatment for extensive-stage small cell lung cancer in nearly 20 years. SCLC is an aggressive cancer with a median overall survival of approximately 9 to 11 months when treated with chemotherapy.3 It is often diagnosed in late stages of disease, and most patients have experienced metastasis by the time of diagnosis.

“The issue with small cell is that it almost always comes back,” said Tim Burns, MD, medical oncologist and researcher at the University of Pittsburgh Department of Medicine, Pennsylvania. Dr Burns said he can “count on 1 hand” his patients that survive 3 or 4 years.

He said that while tumors seems to respond well at first to chemotherapy, the disease usually comes back within 6 months. The issue, according to Dr Burns, is the lack of new treatments. Small cell lung cancer is closely linked to smoking and has a high tumor mutational burden, which theoretically could make it a good candidate for immunotherapy.

“Unfortunately for this cancer, it is,” said James Stevenson, MD, medical oncologist at The Cleveland Clinic, Ohio. He pointed out that 2 months translates to a 20% improvement in this aggressive disease, and he considers it “medically meaningful.” He said this large unmet need in SCLC led to a wide and quick adoption of immunotherapy.

While the median overall survival advantage may only be 2 months, Dr Burns pointed out that for some people, treatment with immunotherapy can provide long-term remission. Some of his patients, for example, have had 3- and 4-year survival rates. “We have not seen this for small cell before, and that’s why there’s a lot of excitement,” he said.

Next, doctors hope to experiment with combinations of immunotherapies and match patients to treatments. Lauren Byers, MD, oncologist at MD Anderson Cancer Center in Houston, Texas, is actively involved with this effort. “Next steps are figuring out targeted therapy combinations and understanding ways to personalize treatment,” she said.

She says small cell lung cancer, like many forms of cancer, is not just a single disease, but many. She is interested in finding biomarkers and hopes that one day, patients with small cell lung cancer can be matched to their treatments by characterizing certain driver mutations or cancer subtypes.

Dr Stevenson noted the use of immunotherapy in SCLC marks a milestone, but there is still a long way to go. He is skeptical about finding biomarkers, and cautioned that there may never be a truly personalized approach in small cell lung cancer due to the degree of genomic damage seen in this cancer type. However, he said, he remains optimistic about finding more efficacious combinations of treatments, such as adding other immunotherapies to the chemotherapy backbone and using them in earlier-stage disease.

“I think we’ve all seen these results translate into the day-to-day management of patients, and I do believe that patients are living longer with small cell lung cancer,” said Dr Stevenson. “But I recognize that we still have a long way to go. It’s 1 small step forward, and hopefully there will be 5 more to come.” 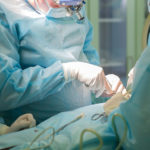