For every 3,300-foot rise in elevation, lung cancer incidence fell by 7.23 cases per 100,000 people, according to research published online in PeerJ.

Kamen Simeonov and Daniel Himmelstein, both M.D./Ph.D. trainees at the University of Pennsylvania in Philadelphia, conducted a study of counties across the Western United States to assess cancer rates and associated variables.

The researchers found that as elevation increased, lung cancer rates declined. They attempted to account for other variables, such as county-by-county differences in sunlight exposure and air pollution — neither of which explained the link between elevation and lung cancer.

Nor did rates of smoking or obesity, or differences in counties’ demographics, including education and income levels, and racial makeup.

The findings support the theory that inhaled oxygen could have a role in lung cancer, Simeonov told HealthDay. He said there was no strong correlation between elevation and rates of several non-respiratory tumors: breast, prostate and colon cancers.

That, said Simeonov, suggests an “inhaled” risk factor is at work. He was quick to add, though, that no study can account for all the variables that sway cancer risk. A next step, said Simeonov, could be a “cohort study,” analyzing data from individual people, as opposed to this county-by-county look. But it would take lab research to figure out whether oxygen exposure, specifically, might affect lung cancer development. 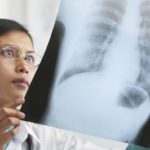