A recent analysis of data between 2001 and 2016 started to fill that knowledge gap, and uncovered a striking trend. While mortality from SCLC fell at the same rate as incidence, mortality from NSCLC has declined even faster than incidence in recent years, suggesting that patient survival is improving for this cancer subtype. The authors wrote that the introduction of targeted therapies for NSCLC in 2013 explains this trend, although some experts told Cancer Therapy Advisor that more evidence is needed to justify that interpretation. The findings were published last month in the New England Journal of Medicine.2

“The first layer of the news is that the incidence for lung cancer is coming down — that’s already off-the-bat good news. A second layer . . . is that even if somebody got diagnosed with lung cancer, they are more likely to survive longer,” said Xiuning Le, MD, PhD, assistant professor in the department of thoracic/head and neck medical oncology at The University of Texas MD Anderson Cancer Center in Houston, who wasn’t involved in the new research.  “This is rewarding that we can [move] the needle.”

Causes of death listed on death certificates typically don’t include information on lung cancer subtypes. To overcome that limitation, the study authors analyzed data from the Surveillance, Epidemiology, and End Results (SEER) program, which has linked death certificate records to diagnosis-based incident cancer cases. This allowed them to calculate “incidence-based mortality” — the population-level mortality attributable to specific tumor types — for NSCLC and SCLC.

Notably, when assessed through the SEER database, overall mortality from lung cancer was lower than when evaluated on the basis of death certificate mortality records from the National Center for Health Statistics. This is likely due to the fact that on death certificates, cancer deaths can often be misattributed to lung cancer when in fact other cancer types have metastasized to the lung, explained Nadia Howlader, PhD, a mathematical statistician in the data analytics branch within the division of cancer control and population sciences at the National Cancer Institute and senior author of the study. Generally speaking, examining incidence-based mortality may be more useful than death certificate-based records for assessing lung cancer mortality trends.

Dr Howlader and her colleagues — including study coleader Douglas R. Lowy, MD, principal deputy director of the National Cancer Institute — documented an overall decrease in incidence for both lung cancer subtypes between 2001 and 2016, likely reflecting a continued reduction in smoking rates in the United States. Declines were faster among men than among women, which can be attributed to sex-based differences in smoking prevalence. From 2001 to 2016, the annual decline in incidence for SCLC (3.6% for men and 2.7% for women) was steeper than for NSCLC (3.1% for men and 1.5% for women), possibly because SCLC risk is more tightly linked to smoking, the authors wrote.

Incidence-based mortality for SCLC fell steadily and in parallel with declining incidence. For NSCLC, however, the team documented a rapid decline in mortality from 2006 to 2013 (3.2% annually for men) which accelerated in 2013 (6.3% annually for men) — a trend that appears to be both a result of declining incidence as well as improvements in survival. The authors estimated that NSCLC-specific 2-year survival was 26% for men diagnosed in 2001, while it was 35% for those diagnosed in 2014. Survival gains were apparent across sex, and racial and ethnic groups.

Dr Howlader and colleagues considered several factors that could possibly explain the abrupt dip in incidence-based mortality for NSCLC. For instance, they ruled out screening because screening rates had been relatively stable during the study period. Declining rates of smoking also didn’t make sense, because that would have affected SCLC more strongly. “We systematically went through and ruled out those possibilities,” Dr Howlader said. “Upstream factors such as changes in risk factors (eg, smoking [and probably also air quality]), tend to have a more gradual and diffuse impact on mortality, even if the risk factor changes are rather abrupt or persistent. Therefore, any changes in risk factors are less likely to have an immediate effect on the rapid mortality decline we observed recently in the data.” 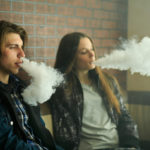 Is the Increase in Teen Vaping Affecting Lung Cancer Rates?