Variants in DNA damage repair genes may play a role in the pathogenesis of malignant pleural mesotheliomas, according to a recent study by researchers from Memorial Sloan Kettering Cancer Center.

The investigators used the MSK-IMPACT next-generation sequencing platform to screen 84 patients with mesothelioma for cancer-predisposing genes.

Using blood samples, they found that 12% of the patients had a pathogenic variant. The majority of mutations found were associated with DNA damage repair.

Although clinical characteristics were similar between patients with and without variants, those with variants were more than twice as likely to have 2 first-degree family members with cancer than those without (40% vs 12%; P <.05).

Among the novel variants identified with the testing were MSH3, BARD1, and RECQL4. Also confirmed were several variants that had been identified in previous studies including BAP1 (4%), BRCA2 (1%), and MRE11A (1%).

“The presence of germline mutations in the DNA damage repair genes BAP1, BRCA2, and MRE11A in our patient cohort supports previous studies identifying these genetic alterations as predisposing to mesotheliomas,” the researchers wrote.

One additional patient was found to have a mutation in SHQ1, which has not been associated with cancer-predisposition or mesotheliomas.

“This study supports the growing body of work suggesting that germline mutations in tumor suppressor and DNA damage repair pathway genes may play a role in mesothelioma tumorigenesis,” the researchers concluded. 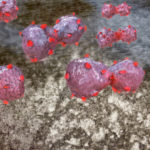