This phase 2 trial (ClinicalTrials.gov Identifier: NCT01190527) treated 42 patients with inoperable or unresectable stage II to III NSCLC with conformal RT individualized to a fixed risk of RILT, resulting in a mean lung dose of less than 20 Gy. The RT dose was escalated up to 86 Gy in 30 daily fractions at midtreatment based on residual tumor as measured by FDG-PET. 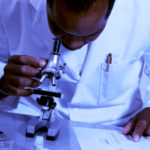