Researchers noted that the PACIFIC trial (ClinicalTrials.gov Identifier: NCT02125461) established a role for the use of immunotherapy after chemoradiation in this patient population.

However, the general population of patients with unresectable, stage III NSCLC in the United States may differ from patients enrolled in the PACIFIC trial.

To assess real-world outcomes of immunotherapy after chemoradiation, the researchers analyzed data from the National Cancer Database.

All patients received chemotherapy and radiation, and 1297 patients (5.4%) received immunotherapy as well. Of the immunotherapy recipients, 16.5% were 75 years of age or older and 16.1% had a Charlson-Deyo Comorbidity Index score of 2-3.

The proportion of patients who received immunotherapy increased over time, from less than 1% in 2015 to 15% in 2017.

In an unadjusted analysis, adding immunotherapy to chemoradiation was associated with superior 3-year survival, compared with chemoradiation alone (52% vs 44%; P <.001).

“The magnitude of the overall survival benefit of immunotherapy is similar to the mortality reduction identified in the PACIFIC trial (HR, 0.68; 95% CI, 0.47-0.997),” the researchers wrote.

However, for those patients who received radiation doses outside of the PACIFIC protocol range (54-66 Gy), there was no significant survival advantage with immunotherapy.

“Overall, the results of this retrospective cohort study suggest that the benefit of immunotherapy after chemoradiation for stage III NSCLC may extend to the general population in the US, including patients who are older and those who are socioeconomically disadvantaged,” the researchers wrote. “There may be flexibility in the multimodality treatment planning, including the time to initiate immunotherapy, which may alleviate barriers to immunotherapy treatment in some patients.” 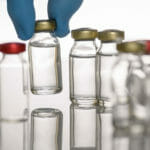 Combo Could Be New Standard After EGFR TKI Failure in NSCLC