The underlying pathophysiology of paraneoplastic SIADH involves the uncontrolled secretion of antidiuretic hormone (ADH) and atrial natriuretic peptide (ANP) by cancer cells. These hormones lead to an overall increase in free water absorption, which when uncontrolled can dilute the patient’s serum and cause hyponatremia.

When attempting to treat a patient’s paraneoplastic SIADH, the degree of sodium correction and the time it takes to do so must be closely monitored, as overcorrection can lead to serious side effects. In more acute situations where the patient’s sodium drops over 48 hours, a patient’s sodium should not be corrected more than 8 to 10 mmol/L during the first 24 hours of treatment to avoid central pontine myelinolysis, which can have devastating central nervous system effects. Patients with chronic hyponatremia should be corrected at a slower rate initially, with a goal of 0.5 to 1.0 mmol/L/hour.

SIADH can be difficult to treat as a paraneoplastic syndrome, especially if the patient has concurrent gastrointestinal and renal losses. With chemotherapy directed at the underlying malignancy, the sodium will typically normalize within several weeks. If these patients do not respond to chemotherapy, or if a more aggressive correction is required, additional treatment options to consider include a fluid restricted diet, demeclocycline, and vasopressin receptor antagonists. It is important to safely normalize the patient’s sodium level, as a failure to do so can result in a shorter survival. 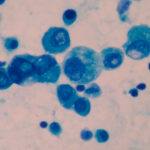