Quitting smoking can have a dramatic and measurable effect on overall survival, even in patients with stage 4 lung cancer, according to a yet-to-be published Canadian study.

An analysis of patient records found that those who quit smoking prior to the start of chemotherapy showed a median overall survival 6 months longer than active smokers.1

“In cancer, that’s a lot,” Dr. Bernard Fortin, one of the study’s authors, told Cancer Therapy Advisor. “We were very happy. We felt that we would find something, but to find something this big—that was a pleasant surprise.”

Along with two other studies presented at the International Association for the Study of Lung Cancer’s 16th World Conference on Lung Cancer in Denver, CO, the results point to strong benefits associated with health care providers offering smoking cessation programs for cancer patients.

“It’s not a treatment. It is an association,” said Fortin. “We have to figure out what causes that improvement. But we’re happy to say to our patients that stopping smoking is never futile.”

Other studies, including one published in the Journal of Thoracic Oncology in July, have found similar associations between smoking cessation and overall survival among patients with earlier stage cancers.2

Last year, the Surgeon General’s report “The Health Consequences of Smoking–50 Years of Progress” stated that “the evidence is suggestive but not sufficient to conclude a causal relationship between cigarette smoking and the risk of disease recurrence, poorer response to treatment, and increased treatment-related toxicity.”3

A retrospective review of clinical data at the Hôpital Maisonneuve-Rosemont in Montreal, Canada, however, specifically focused on patients diagnosed with stage 4 non-small cell lung carcinoma .1

The researchers examined data involving 237 patients treated with at least one cycle of chemotherapy at the hospital between 2008 and 2014.

Of those, Fortin said, 98 remained active smokers. Another 20, considered “never smokers,” had smoked fewer than 100 cigarettes in their lifetime. The others were broken down into groups based on how long before chemotherapy they said they had quit smoking.

Those inactive smokers included 17 who had stopped less than a year before, 24 between 1 to 5 years, 14 between 5 and 10 years, and 64 who reported quitting more than 10 years before beginning chemotherapy.

The results confirmed that active smoking acts as a negative factor on survival, and showed that quitting before chemotherapy was associated with a better median overall survival of 16 months vs 10 months for active smokers.

“The data shows there is a trend,” Fortin said. “The longer you stop smoking, the better you are doing.”

The former smokers also fared better during chemotherapy, Fortin said, with less pronounced side effects. Therefore, the authors concluded, “Efforts to encourage smoking cessation are likely beneficial even among this population of patients.”

Those findings fit neatly with the results of a survey of patients at the Baptist Cancer Center in Memphis, TN, examining their interest in quitting smoking and willingness to participate in cessation services.4

For that study, by Dr. Kenneth D. Ward of the University of Memphis, and colleagues identified a total of 108 new patients diagnosed with various stages of cancer completed a questionnaire that identified their smoking history, among other things.

Nearly half (46%) were current cigarette smokers or had quit within the previous year. Of those, 71% “were ‘very interested’ in quitting smoking in the next month,” and nearly 75% of the ones interested in quitting expressed a willingness to take part in a smoking cessation program at the clinic. 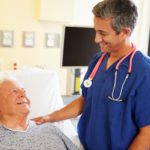