Lung cancer is the leading cause of cancer death in men and women in the United States and is responsible for more than 1.5 million deaths worldwide each year.1,2 Advances in targeted molecular therapies have improved outcomes for some patients with EGFR-driven tumors, but the approximately 25% of people in North America whose tumors are driven by mutated KRAS are generally considered ineligible for these therapies.1

The presence of these mutations, usually found on codon 12 (eg, KRASG12D), is associated with poor prognosis for survival and poor response to EGFR inhibition in patients with non-small-cell lung cancer (NSCLC).1 However, new research from two groups, working independently in Scotland and Vienna, shows that signaling from other ERBB family members is necessary for survival and proliferation in KRAS-driven tumors, and that tyrosine kinase inhibitors (TKIs) that block multiple ERBBs — specifically afatinib and neratinib — produce an antitumor response.2,3

EGFR is one of four ERBB-family receptor tyrosine kinases found upstream of KRAS, a G protein with GTPase activity that is part of the ERK/MEK pathway in cells.2,3 “KRAS is normally activated in response to signaling from upstream receptor tyrosine kinases such as EGFR or ERBB2 (HER2). Activating mutations in KRAS were thought to confer independence from upstream regulators; however, these studies both show that G12-mutant KRAS continues to require input from the EGFR/ERBB family of receptors in order to drive lung cancer,” explained Daniel J. Murphy, PhD, lead investigator in the Oncogene-Induced Vulnerabilities Group at the University of Glasgow Institute of Cancer Sciences and CRUK Beatson Institute for Cancer Research in Scotland.

Patients with KRAS-driven tumors generally are not responsive to EGFR-specific inhibitors used to treat lung cancer (erlotinib and gefitinib). These studies found that as KRAS-mutated tumors progress, they increasingly express non-EGFR ERBB ligands and depend on alternate ERBB-family signaling for survival.2,3 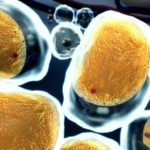