Lung cancer is the leading cause of cancer death in women; more than 27.000 women are expected to die from the disease this year.1 Sex differences in the incidence of lung cancer, histologic type, and survival after diagnosis are well established, yet little is known about the role that female hormones play in lung cancer development or their effect on survival.

Studies of estrogen-only or estrogen-progestin combination menopausal hormone therapy (MHT) use as a risk factor for development of and survival with non-small cell lung cancer (NSCLC) have delivered inconsistent findings.2 Neither the Women’s Health Initiative (WHI) nor the National Institutes of Health-American Association of Retired Persons (NIH-AARP) Diet and Health Study found a relationship between MHT use and lung cancer risk,3,4 although a pooled analysis of six case-control studies from the International Lung Cancer Consortium found MHT use to be associated with a lower risk for adenocarcinoma.5 Similar inconsistencies have been reported in studies examining the effect of MHT on lung cancer survival.6 Interestingly, the WHI found that the use of combination MHT, but not estrogen-only MHT, adversely affected NSCLC survival.3,7

A study recently published in the Journal of Thoracic Oncology may shed new light on the effect of MHT on NSCLC survival, but may also stir further controversy.7 Using data from the Metropolitan Detroit Surveillance, Epidemiology, and End Results Registry, researchers conducted a retrospective, population-based study to identify women diagnosed with lung cancer during a 4-year period (2001-2005). Interview and follow-up data were collected for 485 women. Most women in the study were current or former smokers (92.3%), 77% were white, 92% were postmenopausal, 72% had used oral contraceptives, and 73% had adenocarcinoma.6

MHT had been used by 47.4% of the women. Significant demographic differences emerged between women who had or had not used MHT, including race, likelihood of having quit smoking, education level, and income level.6 Reproductive and hormonal variables that were examined included age at first birth, age at menarche and at last menstrual period, number of children and number of pregnancies, and oral contraceptive use and duration. In multivariate-adjusted analysis, the only reproductive or hormonal variable that predicted improved survival was MHT, with a hazard ratio of 0.69 (95% CI, 0.54-0.89) for ever- versus never-use.6 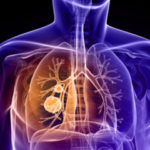