(HealthDay News) — A stage shift from later- to earlier-stage disease during the last decade was associated with improved survival among patients with non-small cell lung cancer, according to a study published online Dec. 17 in JAMA Network Open.

Raja Flores, M.D., from the Mount Sinai Health System in New York City, and colleagues used data from the Surveillance, Epidemiology, and End Results registries to identify 312,382 non-small cell lung cancer patients from 2006 to 2016. The association between stage shift and population mortality was assessed.

“These findings suggest that studies investigating the effect of treatment on lung cancer must take into account stage shift and the confounding association with survival and mortality outcome,” the authors write.

One author disclosed serving as a commissioner on the Medicare Payment Advisory Commission outside the submitted work. 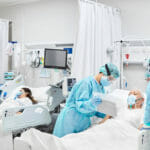 COVID-19 and Lung Cancer: What We Know and Don’t Know