SBRT is the current standard of care among patients with inoperable early-stage NSCLC, and has been shown to lead to better control rates, cost-effectiveness, and decreased number of treatments. Phase 3 studies are ongoing, but there is a lack of evidence that definitively supports the superiority of SBRT compared with CFRT.

Overall, 2286 and 20,802 patients underwent CFRT and SBRT, respectively, and an analysis of temporal trends showed that treatment with SBRT rapidly increased from 2004 to 2009. More than 90% of cases in the most recent included decade received SBRT.

Results showed that patients who were African-American, from urban areas, had lower incomes, more comorbidities, larger tumors, squamous histology, and received treatment at non-academic centers were less likely to receive SBRT (P< .05 for all).

After a median follow-up of 44.6 months, patients who underwent SBRT had a median overall survival (OS) of 38.8 months versus 28.1 months among those who underwent CFRT (P< .001).

Further propensity score matching performed for both cohorts showed that the median OS was 38.2 months compared with 28.1 months among patients treated with SBRT and CFRT, respectively (P< .001). Subgroup analyses also showed that OS was improved in specific subcohorts, including those with T2 disease, Charlson Comorbidity Index score of 2 to 3, and squamous histology. A Cox multivariate analysis demonstrated that SBRT was independently associated with improved OS (P< .001).

The authors concluded that “this investigation demonstrates the survival benefit to ablative radiotherapy for early-stage NSCLC. Maturation of comparative prospective trials is eagerly awaited.” 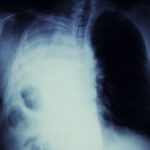