TAS-102 improved survival, when contrasted with placebo, for patients with refractory colorectal cancer, though the drug showed no activity for the second-line treatment of patients with small cell lung cancer, according to a study published in the journal Lung Cancer.1

Investigators enrolled 18 patients with small cell lung cancer who were refractory or sensitive to frontline platinum-based chemotherapy and who required second-line treatment. Participants were randomly assigned to receive TAS-102 35 mg/m2 orally twice daily or chemotherapy with either topotecan or amrubicin. 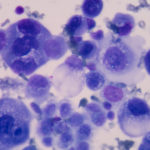