Treatment of diffuse large B-cell lymphoma (DLBCL) with central nervous system (CNS) involvement with an intensive CNS-directed chemoimmunotherapy regimen followed by autologous hematopoietic stem cell transplant (autoHSCT) was found to be active and had a tolerable safety profile, according to the results of the phase 2 MARIETTA trial (ClinicalTrials.gov Identifier: NCT02329080) published in The Lancet Haematology.

The study authors reported that “…the results of the MARIETTA trial are a step forward in the treatment of secondary CNS lymphoma.”

The international, single-arm trial included 75 patients with DLBCL and CNS involvement, either at diagnosis or relapse, who underwent treatment with 3 courses of rituximab plus methotrexate and thiotepa (MATRix) followed by 3 courses of rituximab plus etoposide and carboplatin (RICE) and carmustine-thiotepa. Patients who achieved a partial or complete response with the MATRix-RICE therapy and showed adequate autologous peripheral blood stem cells underwent autoHSCT. The primary endpoint was 1-year progression-free survival, and secondary endpoints included overall response rate and complete response before autoHSCT, duration of response, overall survival, and safety.

The most common grade 3 to 4 adverse events were hematologic, including neutropenia, thrombocytopenia, and anemia. Treatment-related mortality was 5%, all of which was due to infections.

The authors concluded that “MATRix-RICE plus autologous HSCT was active in this population of patients with very poor prognosis, and had an acceptable toxicity profile.” 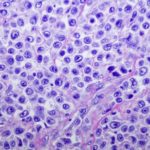