A patient case report described the presentation of intra-abdominal follicular lymphoma, including signs and symptoms consistent with heart failure, in an older man exposed to Agent Orange during the Vietnam War. This case study was published in BMJ Case Reports.1

Agent Orange, which contained traces of 2,3,7,8-tetrachlorodibenzo-p-dioxin (also known as dioxon or TCDD), is a herbicide and defoliant that was used by the US military in Vietnam. Although exposure to Agent Orange has been associated with an increased risk of non-Hodgkin lymphoma based on epidemiologic evidence, a causal relationship has not been established.2 The United States Department of Veterans Affairs in 2010 recognized that various cancers were associated with exposure to Agent Orange, including chronic lymphocytic leukemia, Hodgkin lymphoma, multiple myeloma, non-Hodgkin lymphoma, prostate cancer, respiratory cancer, and soft tissue sarcoma.3

A Hispanic man aged 68 years who was a US military veteran and had served in Vietnam, presented to the hospital with dyspnea requiring intubation. He had a history of multiple comorbidities, including chronic obstructive lung disease, heart failure with preserved ejection fraction, obstructive sleep apnea, obesity, and type 2 diabetes. One month prior to this presentation, the patient was hospitalized for a diagnosis of heart failure and an upper respiratory infection. Nevertheless, upon discharge, he again experienced shortness of breath and weight gain, despite an increase in furosemide dose.

Abdominal and pelvic computed tomography (CT) scans taken upon second hospital admission revealed “bulky confluent masses around the pancreatic head, root of mesentery and the abdominal aorta measuring approximately 20×18×4 cm with massive ascites.”1 Although cytology of chylous ascites was negative for malignancy, grade 1 to grade 2 follicular lymphoma was diagnosed on core biopsy of a retroperitoneal lymph node. A bone marrow biopsy of the left iliac crest was positive for lymphoma cells, leading to a classification of stage IV disease.

The patient responded well to treatment with dexamethasone followed by rituximab and bendamustine, and placement of a peritoneal drain. 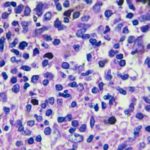