Radiation therapy (RT) alone was highly effective for the treatment of Helicobacter pylori–independent gastric mucosa-associated lymphoid tissue lymphoma (GML), according to the results of a single-center retrospective study published in Blood Advances.

“Given the indolent course of disease progression, as well as changes in radiation technology…we sought to update our experience of treating  H pylori–independent GML with radiation…” the authors stated.

The retrospective study analyzed data from 178 patients with H pylori–independent GML diagnosed from November 1991 to March 2017 at a single tertiary care center. All patients underwent involved-site RT to the stomach, and response was assessed after 10 to 12 weeks by endoscopy and at various intervals thereafter.

The median age of the cohort was 63.5 years, and 56% of patients were women. The time from diagnosis to RT was a median of 4.5 months. The majority of patients had Lugano disease stage I at 86%, followed by 7% each with stage II or IV disease.

Local disease failures were uncommon during the median 6.2-year follow-up. There were 7% of patients with early-stage disease who developed local disease failure, with a 5- and 10-year local failure rate of 3.9% and 8.3%, respectively.

The overall median progression-free survival (PFS) was 13.8 years. When stratified by disease stage, the median PFS was 13.8, 8.9, or 1.7 years for stage I, II, or IV at presentation, respectively.

Treatment-related toxicities were rare according to the authors, with 1% of patients developing a grade 3 esophageal stricture that required dilation and 1.6% developing a secondary malignancy within the radiation field. Dyspepsia was the most common side effect, which was treated with proton pump inhibitors.

The authors concluded that “RT is a highly effective and safe treatment of GML with excellent overall survival and very rare acute or late treatment-related toxicities.”

Disclosures: One of the study authors declared an affiliation with the pharmaceutical industry. Please see original reference for a full list of authors’ disclosures. 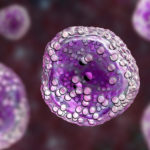