This weekly series highlights eponyms in oncology. This week, we explore the history and namesake of Hodgkin lymphoma.

Hodgkin lymphoma is a hematologic cancer of B-cell origin.1 Most patients are diagnosed between the ages of 15 and 30 years, but the risk of Hodgkin lymphoma rises again at age 55.

Thomas Hodgkin, MD, is the namesake of Hodgkin lymphoma. He was born in England in 1798, was educated at the University of Edinburgh, and practiced at Guy’s Hospital, London.3

In an 1832 publication, Dr Hodgkin described several patients with a multi-organ disease.4 The unifying features were enlargement of the lymph nodes and spleen.

Dr Hodgkin speculated that “a connection exists between the glandular enlargement… and the state of the spleen.” Although the structural abnormalities of the spleen had been previously described, they took on new importance as he recognized the association with nodal involvement, morbidity, and rapidly fatal course of the disease.

Dr Hodgkin chronicled the ineffective treatments given to the patients and confessed that he had “nothing to offer” the patients before they succumbed to their illness.

In 1856, Samuel Wilks, MD, published a paper in which he unknowingly discussed cases that had already been published in Dr Hodgkin’s paper.7 Dr Wilks described patients with lymphadenopathy and splenomegaly and believed the association between the two to be an original observation.

However, after encountering Dr Bright’s 1838 paper, Dr Wilks gave credit to Dr Hodgkin for the discovery and coined the term “Hodgkin’s disease” in an 1865 paper.8,9 The eponym and attribution to Dr Hodgkin has since become ingrained in the oncology literature. 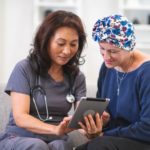