Hodgkin lymphoma is a success story for cancer treatment, with a 1-year survival rate of approximately 92% and an estimated 5-year survival rate of 86%. But the side effects from treatment decrease survival time and diminish the quality of life for many patients. Therefore, identifying which patients are at low-enough risk to avoid or delay intensive treatment is crucial — and a new study by researchers in the United Kingdom offers provocative findings about how imaging can best accomplish that goal.

In recent years, 18-fluorodeoxyglucose (FDG)-positron emission tomography (PET) has become a critical prognostic tool in Hodgkin lymphoma (HL). In particular, international guidelines recommend using the Deauville criteria to assign patients a score of 1 through 5, indicating their response to treatment as revealed by PET imaging.1 (Negative PET images are scored as 1 or 2 and positive PETs are scored as 3, 4 or 5, depending on the level of uptake.)

One prior study found that positive PET scans following 2 cycles of doxorubicin, bleomycin, vinblastine, and dacarbazine (ABVD) chemotherapy identified patients who were likely to benefit from additional treatment.2 But significant gaps remain in understanding what score warrants what treatment, and the lack of standardization in interpreting PET results is problematic.

The UK RAPID trial, which concluded in 2015, examined whether radiotherapy benefitted patients with early-stage HL and negative PET findings after 3 cycles of ABVD.3 Following those results, Sally Barrington, MD, professor of PET Imaging at King’s College London, examined the findings to see whether (and how) a PET score, combined with pretreatment risk factors, predicted patient outcomes.

The RAPID study recruited a total of 602 patients with early-stage HL. Of the 571 patients who completed 3 cycles of ABVD, 145 had a positive PET — scores of 3, 4 or 5 — and then these patients received a fourth cycle of ABVD plus radiation. The other 426 patients had a complete metabolic response to 3 cycles of ABVD, resulting in a negative PET score of 1 or 2. This large group of patients was randomly assigned to receive radiation or no additional treatment. Afterwards, the investigators charted disease progression at 6 months, 12 months, and 24 months.

In their study, published in the Journal of Clinical Oncology in May 2019, Dr Barrington and colleagues looked at event-free survival (EFS), progression-free survival (PFS), and overall survival (OS) in the RAPID data to see how these outcomes correlated with PET score, pretreatment risk factors, and clinical prognostic scores.4 According to their analysis, a high PET score predicted an inferior EFS. Disease progression and disease-related death after chemotherapy was deemed more likely among patients with a PET score of 5, which indicates FDG liver uptake greater than 3 times the maximum. This group also had worse PFS and OS rates.

The findings could help avoid unnecessary and potentially harmful treatment for some early-stage patients. Inferior outcomes arose only among patients with PET scores of 5. Importantly, interpreting a PET image simply as positive, rather than scoring it according to the Deauville criteria, was too encompassing to identify those likely to benefit from treatment escalation. 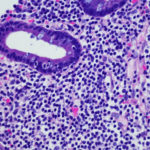