Researchers’ identification of four new genetic subtypes in the most common lymphomas could move treatments closer to true “precision” medicine in the future, experts say.

Although the recent finding needs testing in clinical trials, the researchers found that the tumors of some patients with diffuse large B-cell lymphoma (DLBCL) carried both “good” and “bad” genetic aberrations at the same time — upending earlier assumptions about who might benefit from chemotherapy and who would not. It also could lead to new targeted therapies with fewer toxicities for patients.

Results of the study, led by scientists at the National Cancer Institute (NCI)’s Center for Cancer Research in Bethesda, Maryland, were published earlier this year in The New England Journal of Medicine in an article entitled “Genetics and Pathogenesis of Diffuse Large B-Cell Lymphoma.”1

“The data told us there are four genetic subtypes and they are related to different stages of B-cell differentiation,” said Louis Staudt, MD, PhD, the NCI investigator who led the international team over 2 decades in the quest to better define these aggressive, fast-growing cancers. “When we looked at how they responded, the groups were quite different,” especially in overall 5-year survival, which ranged from 26% in the worst subtype to 68% in the best, he said.

Altogether, using multiplatform analysis, the researchers analyzed genomic alterations and gene expression in the fresh-frozen tumor samples of 574 patients with DCBCL, a type of lymphoma that accounts for some 30 percent of lymphoma. Nearly all of the samples came from mini-cohorts of patients at the time of diagnosis, before treatments began, according to Dr Staudt. ‘We had mature outcomes, with a median survival past 5 years,” he said, adding that, if a tumor relapses, it usually does so within the first 5 years.

The refined molecular classification that finally emerged went beyond the two known major subgroups of diffuse large B-cell lymphoma, previously identified: activated B-cell-like disease (ABC) and germinal B-cell-like disease (GCB).2 Patients who fall into the ABC group, clinicians know, have a worse prognosis than those whose molecular profile places them in the GCB group, with a 40% overall 5-year survival, compared with 75%.

Dividing these large subgroups into smaller ones and then enriching them, Dr Staudt said, allowed researchers to identify shared genetic deviations, not possible before, that arise from different cells of origin and acquire genetic mutations over time.

One of the most interesting findings, he said, was the discovery that some patients, presumably worse off in the ABC group, also carried a subtype with a more favorable genetic pattern, giving them a better chance for a chemotherapy “cure.” The reverse also held true. Patients in the GCB group, thought to benefit the most from chemotherapy, often carried an unfavorable subtype, he said, suggesting a poorer outcome.

Commenting on this revised molecular system, several oncologists praised the work. But, like Dr Staudt, they called for clinical trials, while cautioning against promising too much, too soon.

“It’s an important paper,” said Julie Vose, MD, MBA, chief of oncology/hematology at the Fred and Pamela Buffett Cancer Cancer, part of the University of Nebraska Medical Center in Omaha. “But, once you get down into the subtypes, we do need clinical trials to see whether they work.” 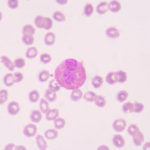