Although standard treatment options for non-Hodgkin lymphoma (NHL), which often include rituximab, have improved survival rates, an unmet need for effective therapy remains for patients with relapsed/refractory disease.1

According to Jeffrey Barnes, MD, PhD, of the Center for Lymphoma at Massachusetts General Hospital Cancer Center in Boston, “blinatumomab appears to be an intriguing agent deserving of further evaluation in NHL.”

Blinatumomab is a bispecific T cell engager (BiTE) antibody construct that binds to both CD3 on T cells and CD19 on B cells by 2 linked single-chain variable antibody fragments. T cells and B cells are brought together, allowing T cells to recognize and target malignant B cells, resulting in tumor cell apoptosis.

CD19 is expressed by malignant B cells and all developmental stages of B cells, except plasma cells and pluripotent stem cells of the bone marrow.

“BiTEs have an advantage over other T cell technologies, including chimeric antigen receptor T [CAR-T] cell programs in that they are ready right off the shelf for use, with no delay in initiating therapy,” Dr Barnes said. He noted that they have similar toxicities, but that BiTEs “can be discontinued where, currently, CAR T cells do not have an ‘off switch.’”

Blinatumomab is administered as a continuous infusion via an ambulatory pump for 4 to 8 weeks. “The drug is stable for only 48 hours requiring bag changes every 2 days…this has, however, been shown in previous phase 1 studies to be well-tolerated in the outpatient setting,” Dr Barnes said.

Efficacy and safety data for blinatumomab in the setting of NHL come from phase 1 and 2 trials, though more, including a phase 2/3 trial, are ongoing.1

In this multicenter, open-label, phase 1 dose-escalation trial (ClinicalTrials.gov Identifier: NCT00274742), 42 patients with relapsed/refractory NHL received blinatumomab as a continuous infusion for 4 to 8 weeks at 7 different dose levels, ranging from 0.5 to 90 μg/m2/day. Patients were treated until dose-limiting toxicity or relevant disease progression occurred. Patients who achieved a clinical benefit from the first cycle received a 4-week consolidation treatment.2

An extension of the phase 1 trial enrolled 34 additional patients who received a target dose of 60 μg/m2/day with 1 or 2 concomitant corticosteroids, and 3 patients received pentosan polysulfate SP54.

The median age of patients at baseline was 65 and their disease histology included follicular (FL), mantle cell lymphoma (MCL; 68%), and diffuse large B cell lymphoma (DLBCL; 18%), among others. The median number of prior therapy was 3 (range, 1-10).

The greatest response to blinatumomab occurred with the 60-g/m2/day dose, with an overall response rate (ORR) of 69%, which included a complete response (CR) rate of 37% and a partial response (PR) rate of 31%. 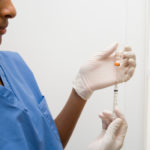