A retrospective analysis of results from prospective phase 2 and phase 3 clinical trials of frontline treatment in a large cohort of patients with advanced chronic lymphocytic leukemia (CLL) showed that while only a small percentage of patients underwent Richter transformation (RT) to aggressive lymphoma, the clinical outcomes of this subgroup were poor. These findings were published in Leukemia.

The development of aggressive lymphoma, in most cases diffuse large B-cell lymphoma (DLBCL), in patients initially diagnosed with CLL is the defining characteristic of RT. Results of a several previous analyses, mostly of data from single clinical trials with limited follow-up, have estimated the incidence of RT in the setting with CLL to be approximately 2% to 10%.

In addition, there is also evidence showing that, in the majority of cases, DLBCL-type RT has different disease characteristics compared with de novo DLBCL not preceded by CLL. These characteristics include an immunoglobulin gene sequence that is clonally related to the CLL precursor, a higher level of expression of programmed cell death-1 (PD-1), and a poorer response to chemoimmunotherapy.

The 8 clinical trials included in this pooled analysis were conducted by the German CLL Study Group between 1999 and 2016, and data on patient-, disease-, and treatment-related characteristics were accessed for the individual patients enrolled in these studies. All study patients had received front-line treatment with chemotherapy or chemoimmunotherapy.

At a median observation time of 53 months, 103 (3.5%) of the 2975 patients with advanced CLL necessitating treatment enrolled in these trials developed RT, with 92% and 8% developing DLBCL and Hodgkin lymphoma, respectively. The median age of patients at diagnosis of RT was 65 years.

Some of the baseline disease-related characteristics that were more common in patients who developed RT versus those who did not were deletion 17p which was present in 14.8% and 6.3% (P =.006) of patients, respectively, and disease classified as high-risk according to the CLL-International Prognostic Index (IPI; 18.4% [RT] vs 7.8% [no RT]; P =.004).

For patients who developed RT, the median time from CLL diagnosis to frontline CLL treatment was over 6 time shorter compared with those who did not develop RT (12.4 months vs 90.2 months). On multivariate analysis, deletion 17p, thymidine kinase levels above 10 U/L, and the presence of B symptoms (ie, fever, night sweats, and weight loss) were independently associated with development of RT.

Median overall survival (OS) from initial CLL diagnosis was also considerably shorter for those who developed RT: 71 months versus 167 months for those without RT (hazard ratio [HR], 2.64; CI, 2.09–3.33).

Notably, the median OS of patients with RT from the time of RT diagnosis was 9.4 months.

The median time from CLL diagnosis to RT was longer for those patients with RT characterized by Hodgkin lymphoma (37.2 months) compared with those with DLBCL-type RT (9.7 months). Furthermore, the median OS from diagnosis of RT was 82.6 months and 8.7 months for those who developed Hodgkin lymphoma and DLBCL, respectively.

In their concluding remarks, the study authors noted that their data “confirm that RT is a rare event but remains a clinical challenge with a disappointing outcome.” 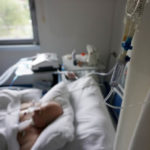