Neurotoxicity was common among adult patients who underwent chimeric antigen receptor (CAR) T-cell (CAR-T) therapy for relapsed lymphomas, and was associated with cytokine release syndrome (CRS), according to data from a longitudinal study published in Scientific Reports.

Although CAR-T therapy results in high response rates and durable remissions among patients with B-cell hematologic malignancies, it has also been associated with substantial toxicities, including CRS and neurotoxicity. The aim of this study was to characterize the incidence and pattern of neurotoxicity in this population.

The study included 84 consecutive patients from 4 French centers who underwent anti-CD19 CAR-T therapy to treat relapsed B-cell lymphomas. All patients received commercially-available products and not through a clinical trial. Patients were identified prospectively and followed longitudinally for neurotoxicity between 2018 and 2019. Neurotoxicity was graded according to the Common Terminology Criteria for Adverse Events (CTCAE) version 5.

At baseline, the median age of the patients was 59 years (range, 19-77 years), and 31% were female. A neurologic exam was normal among 70% of patients, with 24% having peripheral sensitive neuropathy from prior chemotherapy. Several patients had Horner syndrome due to localization of their disease, Wallenberg syndrome with sequelae, mild executive problems, or mild mnesic impairment.

Brain imaging by MRI or CT of 27 of the 36 patients with neurotoxicity were normal. Cerebrospinal fluid examination was abnormal in 9 of the 11 patients evaluated, including isolated high protein levels, isolated pleocytosis, or hyperproteinorachia with pleocytosis.

Neurotoxicity was associated with posttreatment C-reactive protein levels in a multivariate analysis (P =.047).

The authors concluded that “the pattern of neurotoxicity in this homogeneous group of patients treated for B-cell lymphomas identified cognitive disorders and, to a minor degree, nonpyramidal motor disorders, as the hallmark of neurotoxicity linked to CAR T-cell therapy.” The authors added that “these symptoms are insufficiently captured with available scales, which should be updated accordingly.” 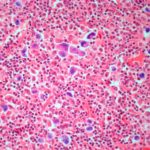