Researchers say they have identified 2 subgroups of patients with diffuse large B-cell lymphoma (DLBCL) who are more likely to benefit from the addition of ibrutinib to rituximab plus cyclophosphamide, doxorubicin, vincristine, and prednisone (R-CHOP).1

The researchers found that younger patients with the MCD and N1 subtypes of activated B-cell (ABC) DLBCL had 3-year event-free survival (EFS) rates of 100% when they received ibrutinib plus R-CHOP. When patients in these subgroups received R-CHOP only, their 3-year EFS rates were around 50%.

The researchers reported these findings in Cancer Cell.

For this study, the researchers analyzed biopsies from patients enrolled in the phase 3 PHOENIX trial (ClinicalTrials.gov Identifier: NCT01855750). Prior results from this trial suggested that adding ibrutinib to R-CHOP improved survival in patients with non-germinal center B-cell (GCB) DLBCL who were younger than 60 years of age.2

The goal of the current research was to determine a mechanistic basis for the age-dependent survival benefit of ibrutinib and test whether subtypes of ABC DLBCL — MCD, BN2, and N1 — predicted a survival advantage.

Of the 773 study participants with biopsies, 340 (44%) were 60 years of age or younger. There were 203 biopsies classified — 110 as MCD, 47 as BN2, and 28 as N1. There were 18 biopsies with features of more than 1 subtype, so they were excluded from the remainder of the study. In addition, the A53 subtype could not be identified due to a lack of DNA copy-number data.

The 21 younger patients with the BN2 subtype did not derive a significant benefit from the addition of ibrutinib to R-CHOP. The same was true for patients with any DLBCL subtype who were older than 60 years of age.

The researchers noted that the MCD and N1 subtypes are “highly enriched in genetic lesions that create a dependence on the BCR-dependent NF-kB pathway, providing a mechanistic basis for the observed clinical benefit from ibrutinib.” 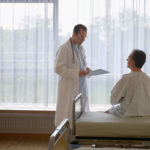