A real-world study provides a benchmark for survival in patients with relapsed or refractory mantle cell lymphoma (MCL) for whom Bruton tyrosine kinase (BTK) inhibitor treatment has failed, according to researchers.

This retrospective study, called SCHOLAR-2 (ClinicalTrials.gov Identifier: NCT04680442), included 240 patients with relapsed or refractory MCL. The patients had received BTK inhibitor-based therapy from July 2012 to July 2018 and had experienced progression on the treatment or discontinued BTK inhibitor therapy due to intolerance.

There were 236 patients with available data on all pre-BTK inhibitor therapies. In this group, 38.1% had received prior bendamustine plus rituximab, 51.7% had received cytarabine-containing regimens, and 58.9% had received other chemotherapy, with or without antibodies.

Disclosures: This research was supported by Kite. Some study authors declared affiliations with biotech, pharmaceutical, and/or device companies. Please see the original reference for a full list of disclosures. 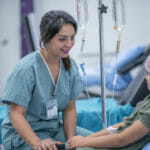