First-line bendamustine plus rituximab (B-R) followed by autologous stem cell transplant (ASCT) and rituximab maintenance appears to be an effective treatment option for younger patients with mantle cell lymphoma (MCL), according to a retrospective analysis published in Blood Advances.

For this study, researchers evaluated real-world evidence to determine whether B-R yields similar clinical outcomes as R-CHOP/R-DHAP (rituximab, cyclophosphamide, doxorubicin, vincristine, prednisone, dexamethasone, cytarabine, cisplatin) in a population of patients with MCL who had the possibility of proceeding to ASCT and rituximab maintenance.

Based on these results, the researchers concluded that B-R with ASCT and rituximab maintenance “may be a reasonable first-line strategy for younger, transplant-eligible patients with MCL.” 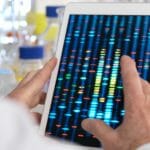