Lenalidomide plus rituximab (R2) may be just as safe and effective among patients with previously untreated follicular lymphoma (FL) compared with the standard combination chemotherapy regimen, according to a study during Presidential Symposium at the 23rd Annual Congress of the European Hematology Association in Sweden.1

After a median follow-up of 37.9 months, the superiority of one regimen versus the other was not established.

The complete response (CR)/CR unconfirmed (CRu) at 120 weeks among patients in the lenalidomide arm was 48% compared with 53% among patients who received standard therapy (P= .38).

Rates of 3-year progression-free survival (PFS) in the R2arm and R-chemo arm was 77% and 78%, respectively, and the 3-year overall survival (OS) rate was 94% in both groups.

The authors concluded that “the superiority of R2 over R-chemo was not demonstrated in this phase 3 trial, however, compared with R-chemo, R2 appeared to show similar efficacy with a different toxicity profile.” 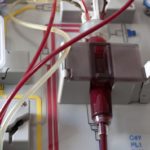