The study was a retrospective, single-center cohort analysis of outcomes for adult patients with DLBCL (N=229) who either experienced an IR or did not during administration of an initial therapy containing rituximab.

The study authors reported that baseline characteristics were not significantly varied between the 2 cohorts in this study.

Presence or absence of a rituximab-related IR appeared significantly associated with OS in this study. At 5 years, there was a 74% lower risk of mortality associated with having an IR compared with not having one (hazard ratio [HR], 0.26; 95% CI, 0.07-0.95). Subgroup analyses suggested that improved OS with IRs may be particularly evident in patients with International Prognostic Index (IPI) scores of 0 to 3.

“In summary, we observed that rituximab-related IRs are associated with significantly prolonged OS in patients with DLBCL,” stated the study authors in their report. The authors also indicated that this study’s results may suggest a role for complement-mediated cytotoxicity in rituximab’s efficacy. 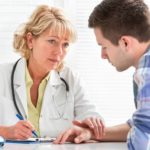