Because of factors such as advances in health care and the decreasing overall incidence of cancer, the number of people age 65 and older around the world is expected to be 1.6 billion by 2050, which is twice the size of the current population at that age.1 That increase will bring a “tsunami” of cancer cases in older patients, researchers say, which pose an array of problematic treatment challenges ― including comorbidities and toxicities ― that are complicated by the age of the patient.

Recognizing the rising effect of the surge and the need to address the specific needs of older patients, a number of practitioners are signaling the need for a multifaceted approach to treatment, along with increased inclusion of seniors in clinical trials.

“The choice for an optimal treatment in older lymphoma patients is a real challenge for hemato-oncologists,” they wrote. “They have to treat a potentially curative lymphoma, and concomitantly protect their patients from unacceptable toxicities.”

In all of its various forms, lymphoma is “the fourth most common cancer and the sixth leading cause of cancer death in the United States,” according to the World Health Organization.3 And, as Drs Bron and Soubeyran point out, the incidence of most subtypes of the disease “increase after the age of 50, with a median age of onset of 67 years.”

But, said Andrew Evens, DO, MSc, FACP, and chief of the division of hematology/oncology and director of Tufts Medical Center, outcomes for older Hodgkin’s lymphoma patients are significantly worse than those for younger ones.

“We know that in almost any cancer diagnosis, older age is an adverse prognostic factor. Meaning, worse outcomes,” he said. “But in Hodgkin’s lymphoma that difference, or that inferiority based on older age, especially once you get over 60, and even more so after age 70, is much more prominent than other cancers. In Hodgkin lymphoma, just based on that sole factor, age above or below 60 or 65, the survival difference can be 40 or 50 percentage points worse versus younger patients.”

Partly, that has to do with the effects of aging, which can affect a patient’s ability to tolerate treatment, Drs Bron and Soubeyran detailed.

“Aging is a natural process leading to the progressive loss of physiological functions, increased inflammatory status, decreased naïve immune T-cell population, increased mutational events and epigenetic modifications resulting in an impaired health status. It is clear today that chronologic age alone is meaningless, as even in very fit patients, marrow reserve, and renal function are decreased and neurological tolerance to toxic drugs is severely impaired.”

There’s also, they continued, the issue of comorbidities.

“A common characteristic of older patients is the presence of comorbidities that necessitate poly-medication, increasing the risk of interaction between these drugs and the ones from lymphoma treatments. In very old patients, we also have to be mindful of geriatric syndromes (falls, cognitive disturbances, incontinence, dementia, and loss of autonomy) that are correlated with a shorter life expectancy.” 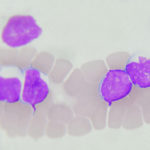