Adding an XPO1 inhibitor, such as selinexor, to melphalan may significantly improve the treatment outcomes of patients with multiple myeloma.1

Although there have been numerous new agents approved by the U.S. Food and Drug Administration in the past several years for the treatment of patients with multiple myeloma, the disease remains incurable and patients ultimately die from refractory, progressive disease. Therefore, researchers at Moffitt Cancer Center & Research Institute in Tampa, FL, sought to investigate whether XPO1 inhibition could improve response to melphalan in preclinical models.

For the study, researchers treated human multiple myeloma parental and melphalan-resistant cell lines with XPO1 inhibitors selinexor (KPT330) or KPT8602 with or without melphalan. Researchers assayed the cells for apoptosis, viability, DNA damage, and phosphor-H2AX protein expression, as well as for tumor growth, survival, and toxicity. Cells treated with an XPO1 inhibitor and melphalan were also assayed for p53, NFkB, IKKα, FANCF, and FANCL.

Researchers found that mice with multiple myeloma tumors that were treated with an XPO1 inhibitor and melphalan demonstrated a strong synergistic antitumor effect, with improved survival and no significant toxicity.

These preliminary data ultimately suggested that XPO1 inhibition augments melphalan-induced DNA damage and may also block the repair of the DNA damage. 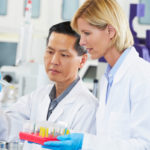