Cancer-related fatigue (CRF) may be prognostic of worse progression-free survival (PFS) and overall survival (OS) among patients with newly diagnosed multiple myeloma (NDMM), according to findings published in the International Journal of Hematology.1

For this prospective study, researchers investigated the incidence and effect of CRF in 16 patients with MM treated with bortezomib, lenalidomide, or thalidomide. Eleven patients had NDMM, and 5 had relapsed/refractory MM. Salivary samples were collected to measure HHV-6 and 7 reactivation during the first and second chemotherapy cycles, then on day 1 of the third cycle and following cycles. The visual analogue scale (VAS) was used to assess CRF at the same time of saliva sample harvesting.

After 4 months, HHS-6 and HHS-7 were reactivated in 73.1% and 45.6% of patients, respectively, but viral reactivation was not found to be associated with any particular clinical factors, including CRF.

The results of this study demonstrate that CRF, a major symptom among patients with MM, can worsen survival outcomes and be predicted by poor performance status. CRF however, was not found to be associated with viral reactivation or any specific treatment type. The authors concluded that “future studies have been planned to analyze CRF-related factors including cytokines and reactivation of HHV-6 and HHV-7 in a larger cohort of NDMM.” 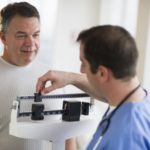 Measurement of Excess Abdominal Fat, Not BMI, May Be a More Accurate Risk Factor for Blood Cancers