About Multiple Myeloma
Multiple myeloma is an incurable blood cancer that affects plasma cells and accounts for approximately 10 percent of hematologic cancers. Progress in treating the disease has focused on extending survival through stem cell transplants; however, transplants are not a cure for multiple myeloma.1 The good news for patients is there have been scientific advancements over the last two decades that have led to a shift in how multiple myeloma is treated in conjunction with transplants.

DARZALEX® Indication for Transplant-Eligible Patients
Providing effective treatments has been a determined effort across the research community. The U.S. Food and Drug Administration (FDA) approved DARZALEX® (daratumumab) in combination with bortezomib, thalidomide, and dexamethasone (VTd) in newly diagnosed patients who are eligible for autologous stem cell transplant (ASCT). DARZALEX® is the only CD38-directed antibody approved to treat newly diagnosed, transplant-eligible multiple myeloma patients.3

DARZALEX® is contraindicated in patients with a history of severe hypersensitivity (e.g., anaphylactic reactions) to daratumumab or any of the components of the formulation. See additional Important Safety Information below.

“This indication for daratumumab in the frontline setting is based on results from the Phase 3 CASSIOPEIA trial, which demonstrated that 29 percent of newly diagnosed multiple myeloma patients achieved a stringent complete response post consolidation when treated with the combination of DVTd versus VTd alone,” added Dr. Saad Usmani, Department of Hematologic Oncology and Blood Disorders, Levine Cancer Institute/Carolinas HealthCare System. “With a robust set of data in various settings, daratumumab regimens represent important treatment options for multiple myeloma patients. ”

A Closer Look at the Data
This expanded indication was based on results of the randomized, open-label, multicenter, Phase 3 CASSIOPEIA (MMY3006) study sponsored by the French Intergroupe Francophone du Myelome (IFM) in collaboration with the Dutch-Belgian Cooperative Trial Group for Hematology Oncology (HOVON) and Janssen Research & Development, LLC.3 Primary endpoint of the trial was stringent complete response (sCR) assessed 100 days after transplant, or immediately following consolidation if greater than 100 days.3,4 Results from the study demonstrated that sCR rate was significantly higher in the DARZALEX®+VTd (29 percent) arm compared with VTd alone (20 percent) (Odds Ratio [OR] = 1.60; 95 percent confidence interval [CI], 1.21–2.12; P=0.0010).3,5

“The approval based on the CASSIOPEIA study marks the first CD38-directed therapy for the treatment of adult patients with newly diagnosed, transplant-eligible multiple myeloma,” said Andree Amelsberg, M.D., MBA, Vice President, U.S. Medical Affairs, Janssen Oncology. “We’re proud to build on the success of DARZALEX in the multiple myeloma frontline setting in combination with additional treatment regimens to offer healthcare providers important options in the treatment of this complex disease.”

New developments in the understanding and treatment of multiple myeloma continue to impact patient outcomes. The CASSIOPEIA study and resulting FDA approval add to the body of evidence that DARZALEX® provides added clinical benefit to VTd in the frontline setting for all newly diagnosed transplant-eligible patients with multiple myeloma. This approval marks the seventh for DARZALEX® since it was first approved in November 2015 as a monotherapy for patients with multiple myeloma who have received at least three prior lines of therapy, including a proteasome inhibitor (PI) and an immunomodulatory agent, or who are double refractory to a PI and an immunomodulatory agent.3

Since its approval in 2018, more than 100,000 patients have been treated worldwide with DARZALEX®.3

DARZALEX® (daratumumab) is indicated for the treatment of adult patients with multiple myeloma:

DARZALEX® is contraindicated in patients with a history of severe hypersensitivity (eg, anaphylactic reactions) to daratumumab or any of the components of the formulation.

DARZALEX® can cause severe and/or serious infusion-related reactions including anaphylactic reactions. In clinical trials (monotherapy and combination: N=2066), infusion-related reactions occurred in 37% of patients with the Week 1 (16 mg/kg) infusion, 2% with the Week 2 infusion, and cumulatively 6% with subsequent infusions. Less than 1% of patients had a Grade 3/4 infusion-related reaction at Week 2 or subsequent infusions. The median time to onset was 1.5 hours (range: 0 to 73 hours). Nearly all reactions occurred during infusion or within 4 hours of completing DARZALEX®. Severe reactions have occurred, including bronchospasm, hypoxia, dyspnea, hypertension, laryngeal edema, and pulmonary edema. Signs and symptoms may include respiratory symptoms, such as nasal congestion, cough, throat irritation, as well as chills, vomiting, and nausea. Less common symptoms were wheezing, allergic rhinitis, pyrexia, chest discomfort, pruritus, and hypotension.

Pre-medicate patients with antihistamines, antipyretics, and corticosteroids. Frequently monitor patients during the entire infusion. Interrupt DARZALEX® infusion for reactions of any severity and institute medical management as needed. Permanently discontinue DARZALEX® therapy if an anaphylactic reaction or life-threatening (Grade 4) reaction occurs and institute appropriate emergency care. For patients with Grade 1, 2, or 3 reactions, reduce the infusion rate when re-starting the infusion.

Daratumumab binds to CD38 on red blood cells (RBCs) and results in a positive Indirect Antiglobulin Test (Indirect Coombs test). Daratumumab-mediated positive Indirect Antiglobulin Test may persist for up to 6 months after the last daratumumab infusion. Daratumumab bound to RBCs masks detection of antibodies to minor antigens in the patient’s serum. The determination of a patient’s ABO and Rh blood type is not impacted. Notify blood transfusion centers of this interference with serological testing and inform blood banks that a patient has received DARZALEX®. Type and screen patients prior to starting DARZALEX®.

DARZALEX® may increase neutropenia and thrombocytopenia induced by background therapy. Monitor complete blood cell counts periodically during treatment according to manufacturer’s prescribing information for background therapies. Monitor patients with neutropenia for signs of infection. Consider withholding DARZALEX® until recovery of neutrophils or for recovery of platelets.

Interference With Determination of Complete Response

Daratumumab is a human IgG kappa monoclonal antibody that can be detected on both the serum protein electrophoresis (SPE) and immunofixation (IFE) assays used for the clinical monitoring of endogenous M-protein. This interference can impact the determination of complete response and of disease progression in some patients with IgG kappa myeloma protein.

Based on the mechanism of action, DARZALEX® can cause fetal harm when administered to a pregnant woman. DARZALEX® may cause depletion of fetal immune cells and decreased bone density. Advise pregnant women of the potential risk to a fetus. Advise females with reproductive potential to use effective contraception during treatment with DARZALEX® and for 3 months after the last dose. 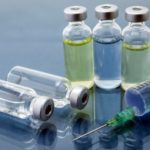