A new study suggests that for patients with BCR–ABL-negative myeloproliferative neoplasms (MPNs), direct oral anticoagulants (DOACs) may be as safe and effective as vitamin K antagonists in controlling the risk of arterial/venous thromboembolic events (ATEs/VTEs). Results were reported in the Annals of Hematology.

The study was a retrospective, noninterventional analysis conducted at a university hospital in Germany. The study investigators compared outcomes with DOACs vs vitamin K antagonists in 782 patients with an MPN. Outcomes of interest were efficacy in treatment of thromboembolic events, prevention of relapses, and bleeding risk.

ATEs/VTEs occurred among patients in this study at a rate of 9.1% overall. Most of these events (87.3%) were VTEs, and the remainder (12.7%) were ATEs. Vitamin K antagonists were used to treat the majority (63.4%) of thromboembolic events, with the remaining events (36.6%) treated using DOACs. Patients had a median follow-up time from an initial ATE/VTE of 3.2 years (range, 0.1-20.4) in this analysis.

ATE/VTE relapse-free survival was similar between treatment groups (P =.2). However, vitamin K antagonists were associated with a higher rate of thromboembolic relapses during treatment (P =.0003).

“Despite the limitations — small number of patients, retrospective analysis, and short treatment time — our data suggest that the use of DOAC was as effective and safe as [vitamin K antagonists],” the study investigators concluded in their report. 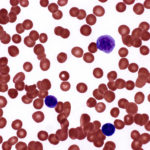