Heavily pretreated patients with relapsed or refractory multiple myeloma (RRMM) treated with CD38-directed daratumumab through an early-access treatment protocol (EAP) had safety results consistent with those reported in clinical trials, according to a study published in Cancer.1 Additionally, treatment with daratumumab had no negative impact on patient-reported outcomes, according to the study authors.

“This EAP study confirms the safety profile of daratumumab monotherapy in a large cohort of patients with relapsed and refractory multiple myeloma that was similar to the initial population indicated for daratumumab in the US,” wrote Ajai Chari, MD, Icahn School of Medicine at Mount Sinai, New York, New York, and colleagues. “The large safety sample size is of value, and EAPs offer an ethical, compliant means of addressing unmet needs in patients with limited treatment options, or who have exhausted all available options, by making a drug accessible to those who are not eligible for ongoing trials and before the drug is commercially available.”

Patients in the study gained access to daratumumab prior to its commercial availability, but the drug was subsequently approved by the US Food and Drug Administration (FDA) in combination with lenalidomide and dexamethasone or bortezomib and dexamethasone in patients with myeloma and 1 or more prior lines of therapy.

This approval was supported by data from 2 phase 3 studies: CASTOR and POLLUX.2,3 In the CASTOR study, patients were treated with bortezomib plus dexamethasone with or without daratumumab. Daratumumab reduced the risk for death or progression in patients by 61% and had an overall response rate of 83%. In POLLUX, where daratumumab was studied with lenalidomide instead of bortezomib, there was a 63% reduction in risk for progression or death and an overall response rate of 93%.

This study included 348 patients enrolled at 39 sites in the United States between June 2015 and December 2015. Patients were included if they had 3 or more prior lines of therapy that included a proteasome inhibitor and an immunomodulatory agent, or if they were refractory to both of these types of agents.

Patients were treated with 16 mg/kg daratumumab for 8 weeks, every other week for 16 weeks, and monthly until they progressed, had unacceptable toxicity, or 60 days after the drug gained FDA approval.

The median time on therapy was 1.9 months. More than half of patients (52%) transitioned to commercially available daratumumab after the FDA approval, and more than one-third (37%) discontinued treatment due to disease progression.

“There are published case reports using montelukast (a leukotriene receptor antagonist used to treat asthma and allergies) in resensitization protocols for patients who have hypersensitivity reactions to monoclonal antibodies,” the researchers wrote.

“Patients who received montelukast had fewer respiratory and gastrointestinal symptoms than those who did not receive montelukast, whereas systemic symptoms, such as chills, were similar in both groups,” they continued. “This positive effect may have been caused by generalized histamine secretion and local inflammation inhibition by montelukast, as leukotriene receptors are present in both the lung and the gut.” 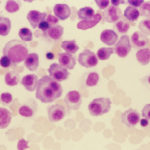 Daratumumab Plus Lenalidomide and Dexamethasone May Benefit Some Patients With MM