In the nearly 40 years since the term “monoclonal gammopathy of undetermined significance [MGUS]” came into use, much has been learned about its potential to progress to multiple myeloma or related plasma cell disorders.

Much, however, remains a mystery, including the curious fact—noted recently by Dr Madhav V. Dhodapkar of Yale University—that MGUS cohorts have a comparatively lower life expectancy, “which is not entirely explained by the risk of malignant transformation.”1

Pointing to our lack of understanding, Dr Dhodapkar raised the provocative question: “are we under-exploring the significance of MGUS?”

It’s true, Dr Dhodapkar stated, that researchers have learned many things about MGUS. But identifying the underlying trigger for the disorder remains elusive.

“We have studied it here for 50-plus years and we’re no closer to the cause of the condition than we were before,” Dr Robert Kyle, who first coined the term “MGUS,” said by phone from his office at the Mayo Clinic in Rochester, Minnesota. “But efforts should be continued in this regard to learn as much as we can about it.”

Dr Kyle’s interest in MGUS began in the early 1960s, with a woman who presented with multiple myeloma. Looking back on her records, he found she had been at the Mayo Clinic nearly 20 years earlier complaining of fatigue. Blood tests then showed elevated globulins. Tests 10 years later showed a large spike, but the bone marrow showed only a few plasma cells. Nearly another decade went by before she developed back pain and anemia, and doctors diagnosed her with multiple myeloma. In 1978, after studying a cohort of 241 similar cases, Dr Kyle identified the disorder as MGUS, and made the connection to future malignancies.2

“The median interval from recognition of the monoclonal protein to diagnosis of multiple myeloma was 64 months,” he wrote in his landmark study, “of macroglobulinemia 103 months and of amyloidosis 92 months.”

The definition of MGUS has since been refined to involve, as Dr Kyle wrote in 2011, “a serum M protein level of less than 3 g/dL, less than 10% clonal plasma cells in the bone marrow, and the absence of end-organ damage.”3

The prevalence of MGUS is 3.2% among Caucasians, and approximately twice that among African Americans. Radiation and pesticide exposure may also be factors.

But it’s not regularly tested for, and may be found only by accident. “It is asymptomatic and is found unexpectedly during laboratory testing of an apparently normal person, or it may be found during the evaluation of an unrelated disorder,” Dr Kyle wrote.

MGUS may progress to multiple myeloma, AL amyloidosis, Waldenstrom’s macroglobulinemia, or lymphoma. But not all cases progress to malignancy.

“The risk of progression is approximately 1% per year,” Dr Kyle explained by phone. “The important point to keep in mind is that this 1% per year persists indefinitely, I believe.”

The risk factors for progression include the size of the serum M protein, the protein type, the number of plasma cells in the bone marrow, and the serum free light chain ratio.

“At age 70, over the next 25 years, there are many things that can happen to you other than progression of MGUS to myeloma or a related disorder,” Dr Kyle added. “In other words, heart attacks, strokes, other cancers which have nothing to do per se with the MGUS.” 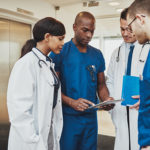