Patients with multiple myeloma (MM) had higher levels of long non-coding RNA antisense non-coding RNA from the INK4 locus (lncRNA ANRIL) than controls, which was also associated with shorter progression-free survival (PFS), according to the results of a study published in Hematology.

Data from previous studies suggest that lncRNA ANRIL promotes cell proliferation, migration, and invasion through modulation of microRNAs. “It was hypothesized that lncRNA ANRIL might be clinically implicated in MM via interacting with miR-34a, miR-125a and miR-186,” the authors stated.

The study evaluated data from 87 patients with MM and 30 controls without MM. Bone marrow–derived plasma cells were used to determine the levels of lncRNA ANRIL and miR-34a, miR-125a, and miR-186.

Among patients with MM, higher levels of lncRNA ANRIL were associated with a lower likelihood of achieving a complete response (CR) with treatment (P =.036) and shorter PFS (P =.031), but not objective response rate (ORR; P =.064) or overall survival (OS; P =.076).

The authors concluded that “lncRNA ANRIL and its target miRNAs…reflect risk stratification [and/or] prognosis in patients with MM, which might assist with the disease management and the prognosis improvement in these patients.” 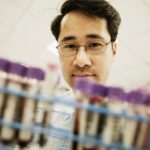